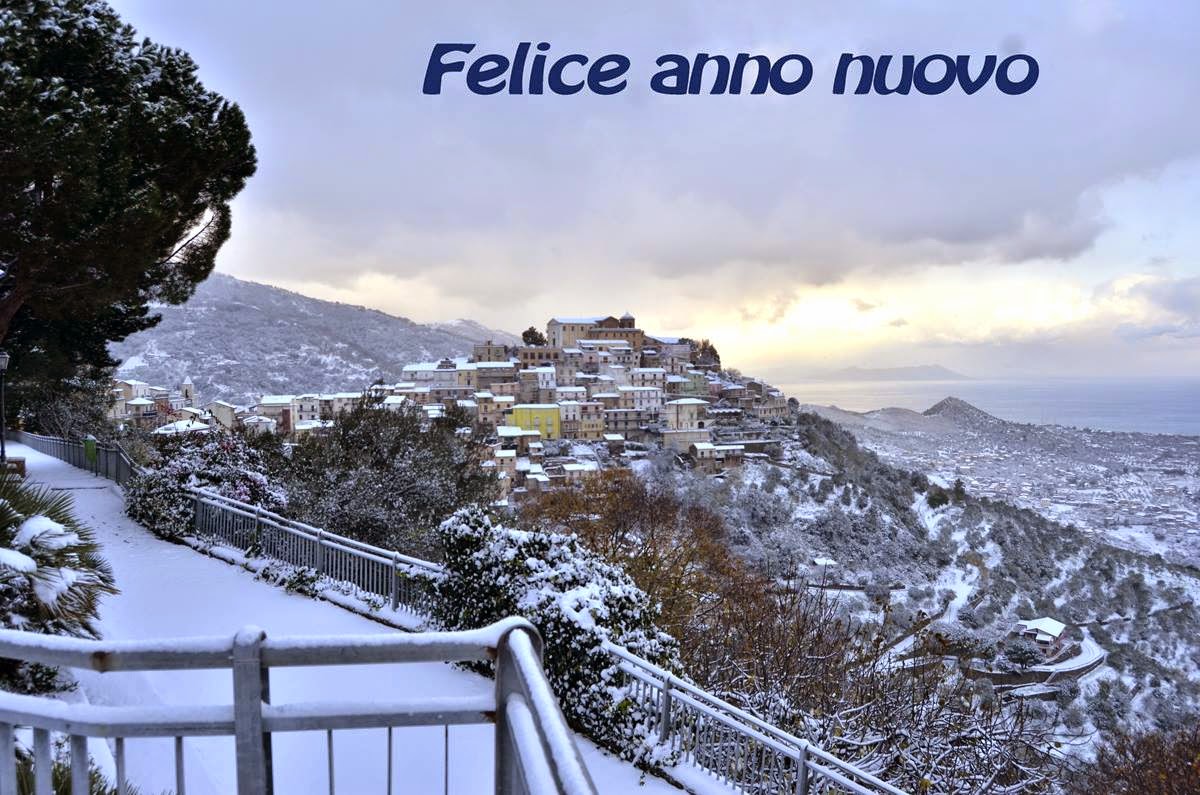 This beautiful photo of Librizzi under a dusting of snow was taken by my cousin Melo Rifici.
(For a larger view, please click on photo)

For a fantastic video of Librizzi under the snow,  taken from a drone by Michael Arlotta, please go here:

Italy has a long history of setting up Presepi at Christmas time, both at home and in public places. I just finished reading an article in the "Italian Notebook" which I find interesting and hopefully you will too.

The article titled 'Presepi in a Presepe' and is written by GB Bernardini. It is about the Presepi in a very unusual town called Artena. Artena is near Rome in the Lazio Region.

The above is one of the Presepe in the town. The sign says "We will be back soon, Joseph and Mary.
I love the humor!

Read the article and see lots of photos here:

FELICE NATALE A BUON ANNO NUOVO A TUTTI.
MERRY CHRISTMAS AND HAPPY NEW YEAR!
Posted by Maria at 6:32 AM No comments:

In honor of this special day I present to you Elena Lucrezia Cornaro Piscopia. Elena was the first woman in Europe to graduate from a University. She studied and received her degree from the University of Padua, Italy.

Elena was born in Venice on June 5, 1646. Her father, a wise man in my opinion, wanted his daughter to be educated (a novel idea for those times). Elena was an avid learner, could speak several languages, was fluent in Latin. While at the University she had sought a degree in Theology but the thinking of the times did not allow women in the field of Theology. The degree conferred on her was a Doctorate of Philosophy, she received it on June 25, 1678. It is reported that 30 thousand people showed up for the graduation ceremonies which took place at the Cathedral. Records show that her acceptance speech lasted three hours and was given totally in Latin. Elena died a young woman at the age of 38. The date was June 25, 1678. 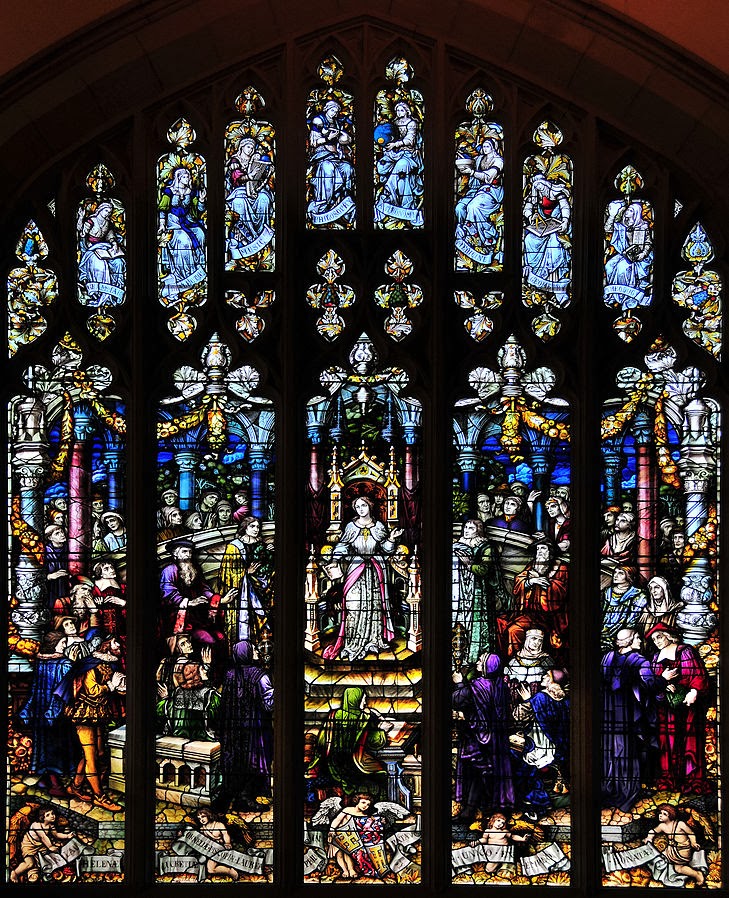 Francesco Politano from Amantea, Calabria, is my cousin’s husband. He is a poet, essayist, teacher for over thirty years. As a poet, he has received a number of awards, and has published several books of poems. The following are the titles of some of his books:’ Il rumore del silenzio’; ‘Le parole, gli anni’; ‘Nel bosco dei palazzo’; ‘ Nell’atelier del cuore’; ‘ Il fruscio delle cose’. His poems have been translated into Spanish, French, and English.

Francesco’s last book has been published in both Italian and Spanish. The titles are: ‘Il fruscio delle cose’ in Italian, and ‘El murmullo de las cosas’ in Spanish. My interpretation of the title is ‘The Whispering Of Things’.

In this last book he has included a poem dedicated to me, and one dedicated jointly to my husband and a cousin in Italy.

In his poems Francesco looks for meanings beyond the superficiality of things/people, tries to find the roots/core of meaning. He looks for ties between present and past, youth and old age, animals and inanimate objects, internal and external situations. His verses are usually narrative and descriptive, characterized by conciseness.

1. Poem dedicated to me, in Italian, Spanish, and English. The English version is my rendition, hopefully the author will forgive me if I missed the gist of the poem.

“The biggest fantasy is
That life is real”
Writes the American cousin in her blog
To old and new friends.

2. Poem dedicated to my husband and our cousin Carmelo:

My translation into English:

Fred and Carmelo, today’s photo artists.
They reject the ordinary
Attempting to grasp
The profound splendor of things.

THANK YOU VERY MUCH COUSINS FRANCESCO AND MARIA. FRANCESCO, YOU HONOR US WITH YOUR BEAUTIFUL VERSES. WISHING YOU LOTS OF SUCCESS WITH THIS NEW BOOK.

Please help in the restoration of the Statue. 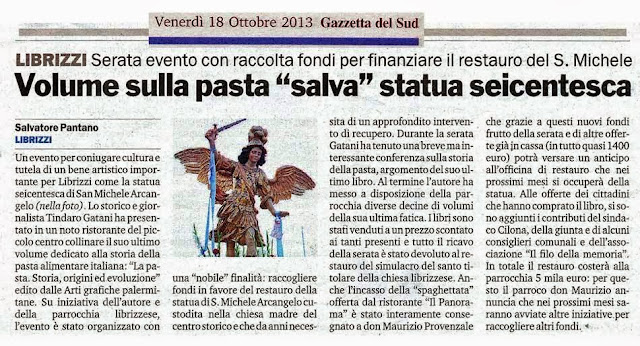 Please make a donation to help in the restoration of the historical statue of S. Michele Arcangelo in Librizzi. Thank you. 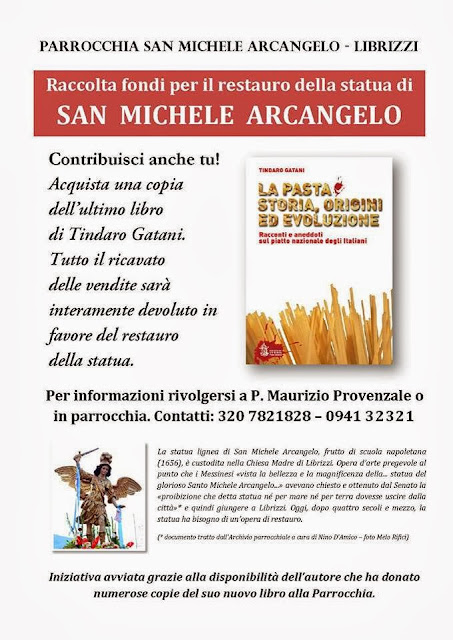 Everyone stands alone at the heart of the world,
pierced by a ray of sunlight,
and suddenly it’s evening.

These three verses constitute a whole poem written by Salvatore Quasimodo, my favorite Sicilian poet.
I identify with the sentiments expressed in this poem and after a life of many challenges I, like Quasimodo, have concluded that life indeed is a brief, painful moment, followed by death.

The poem titled’ Ed è subito sera’ is part of his first collection of poems Acque e Terre (Waters and Lands), published in 1930. During this first phase, Quasimodo’s writings belong to a hermetic poetic movement which reflected on the existential condition of man. Solitude, the pain of living, and death are the three themes expressed in the poem. The author, while living in the hub of life’s activities, tragically feels alone, incapable to communicate with others.  His second verse talks about human life and that even though there are rays of happiness at the same time there is pain due to the knowledge that death is to follow. The third verse is the dramatic conclusion which is death. Evening being the metaphor for death.

Another poem from ‘Acque e Terre’ that I treasure in my memory is ‘Vento a Tindari’ (Wind at Tindari).  This poem is set in Tindari a town that can be seen from the one of my birth, Librizzi. Tindarys (Tindari) has a long historical background that goes back to the Greek roots of Sicily, here was established the last Greek colony.  Later the Romans added their footprints, and it is here where the revered Black Madonna has her beautiful cathedral.  The poem ‘Vento a Tindari’ is inscribed on a wall in Tindari and it was here where I discovered Salvatore Quasimodo. In the 1970s my family and I visited Tindari and while walking to the Greek amphitheater we found the poem, and my love for SQ’s poetry had its beginning.

Tindari, I know you
mild between broad hills, overhanging the waters
of the god’s sweet islands.
Today, you confront me
and penetrate my heart.

I climb airy peaks, precipices,
following the wind in the pines,
and the crowd of them, lightly accompanying me,
fly off into the air,
wave of love and sound,
and you take me to you,
you from whom I wrongly gathered
evil, and fear of shadow, silence
– refuge of sweetness, once certain –
and death of spirit.

It is unknown to you, that country
where each day I go deep
to nourish secret syllables:
a different light bares you, behind the windows
clothed in night,
and another joy than mine
rests on your breast.

Exile is harsh
and the search, for harmony, ending in you,
changes today
to a precocious anxiousness for death,
and every love is a shield against sadness,
a silent stair in the gloom,
where you station me
to break my bitter bread.

Return, serene Tindari,
stir me, sweet friend,
to raise myself to the sky from the rock,
so that I might shape fear, for those who do not know
what deep wind has searched me.

Salvatore Quasimodo was born on August 20, 1901 in Modica, Sicily where his father was a stationmaster with the Italian railroads. After the devastating Messina earthquake of 1908, his father was sent to Messina to help with the reconstruction of Messina. Salvatore was educated in Messina until 1919.  From Messina he went to Rome to study engineering but did not complete his studies, instead he held a variety of jobs until 1926 where he became an employee of the Civil Engineering Board. He was transferred several times to other areas of Italy and finally in 1938 he left his job to become the editor of the weekly Tempo.  In 1941 he became a professor of Italian Literature at the Giuseppe Verdi Conservatory of Music.

During WWII, Quasimodo was involved in the anti-fascist movement and was briefly imprisoned.  The work that he produced during and after the war he addresses and interprets contemporary history, social conditions, and the persistence of hope.  His wokd ‘Giorno dopo giorno’ (Day after Day), 1947, tackles Italy’s hardships and his horror with Italy’s role in the war.  This book of poems is considered the best book of poetry to come out of WWII. Below is one of the poems from ‘Giorno dopo giorno’ :

You are the creature still of stone and sling,
man of my time. Yours was the cockpit
of malignant wings, the gnomons of death,
– I saw you – in the fiery chariot, at the gallows,
at the torturer’s wheel. I saw you: it was you,
your exact science devoted to extermination,
without love, or saviour. Again you kill,
as ever, as your fathers did, as the creatures
that saw you for the first time, killed.
And the blood still smells of that day
when one brother said to the other:
‘Let us go to the field.’ And that echo, chill,
tenacious, reaches down to you, in your day.
Forget, o sons, the clouds born of blood
risen from the earth, forget the fathers:
their tombs sink down deep in the ashes,
dark birds, the wind, cover their hearts.

Quasimodo was also known for his translations of Greek and Latin poets such as Homer, Aeschylus, Sophocles, and Virgil. He translated Shakespeare, Moliere, and contemporary poets such as e.e. cummins, Pablo Neruda, and Conrad Aiken.

Quasimodo received many awards and prizes, among them the  Premio San Babila (1950), Premio Etna-Taormina, 1953(together with Dylan Thomas) (1953), Premio Viareggio,1958 and, finally, the Nobel Prize for Literature, 1959. In 1960 and 1967 he received honoris causa degrees from the Universities of Messina and Oxford, respectively.
Posted by Maria at 12:25 PM No comments:

When I think of Librizzi in Spring, I think of Poppies and Ginestra (Broom Plants). I have not been able to grow Poppies in my area but I have succeeded to grow Ginestra.

Azaleas and Redbuds are two of the many flowers that typify the area I live in in Virginia, USA. I hope that you enjoy the photos. 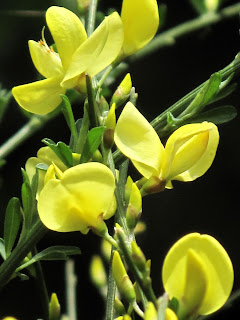 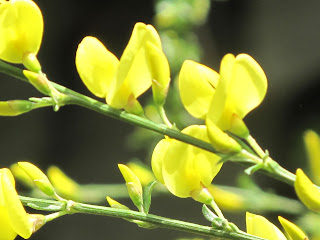 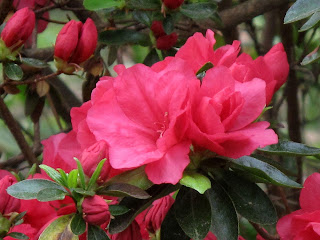 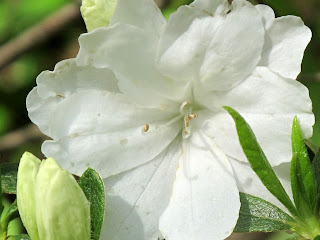 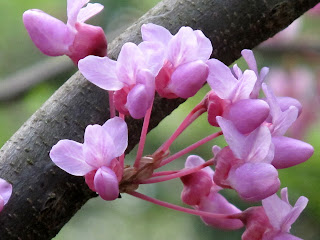 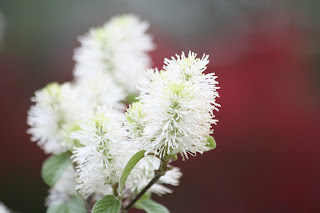